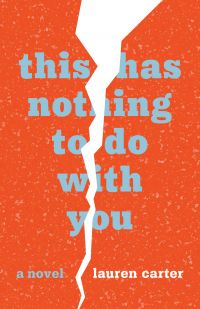 The morning after her high school graduation, Mel and her older brother Matt drive by a crime scene. A few hours later, the police arrive at their door; it turns out the two siblings had witnessed the aftermath of their father’s murder—by their mother. This Has Nothing to Do With You is the story of how Mel and her brother come to terms with their mother’s destruction of their family and her past that fueled her actions.

Three years after the murder, Mel has not gone to visit her mother in prison. After drifting around the continent, living in Vancouver’s Downtown Eastside, and then in a cave in Arizona, she has returned to her family and friends in Northern Ontario and is struggling to care for a dog, Grommet, a mastiff with a tragic past who lives with her in a too-small apartment that does not allow pets.

Meanwhile Matt , a new parent, is withdrawing from his family, increasingly unable to pull himself away from the news, looking on in horror as the Rwandan genocide unfolds, desperate to do something.

Lauren Carter’s compulsively readable novel follows a dynamic cast of characters about their lives in Northern Ontario and pays tribute to the bonds that are formed through trauma and grief—with siblings, spouses, lovers, friends, and dogs.