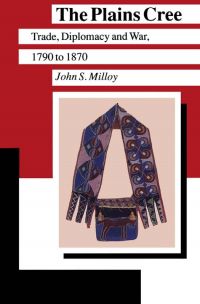 The first economic, military, and diplomatic history of the Plains Cree from contact with the Europeans in the 1670s to the disappearance of the buffalo from Cree lands by the 1870s, focussing on military and trade relations between 1790 and 1870.Milloy describes three distinct eras, each characterized by a paramount motive for war--the wars of migration and territory, the horse wars during the 'golden years' of Plains Indian life, and buffalo wars, which mark the trail to the reserves. Intimately linked to each era was a particular trade pattern and a military system that linked the Cree with other Plains tribes and non-Natives. By tracing these themes, Milloy charts the ability of the Cree to serve their economic interests by forging alliances or undertaking military or diplomatic offensives.

John Milloy is a professor in the departments of Native Studies and History, and Master of Peter Robinson College, Trent University, Peterborough, Ontario.