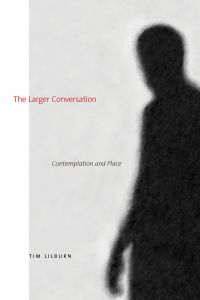 This volume, the final in Tim Lilburn’s decades-long meditation on philosophy and environmental consequences, traces a relationship between mystic traditions and the political world. Struck by the realization that he did not know how to be where he found himself, Lilburn embarked on a personal attempt at decolonization, seeking to uncover what is wrong within Canadian culture and to locate a possible path to recovery. He proposes a new epistemology leading to an ecologically responsible and spiritually acute relationship between settler Canadians, Indigenous peoples, and the land we inhabit. The Larger Conversation is a bold statement: a vital text for readers of environmental philosophy and for anyone interested in building toward conversation between Indigenous peoples and settlers.

With The Larger Conversation, Tim Lilburn completes a manifesto on poetics, eros, philosophy, and enviro-politics that began with the classic Living in the World As If It Were Home (Cormorant Books). A Governor General’s Award winner and the first Canadian to win the European Medal of Poetry and Art, he lives and teaches in Victoria, British Columbia.